In this article, you will learn about WannaCry ransomware. How this virus spread and it’s prevention. Wannacry Ransomware attack is one of the dangerous virus programs that usually demand money by locking your computer system or main programs.

It’s all started when National Security Agency (NSA) of the USA find a vulnerability in Window Operating system in Server Message Block (SMB) Protocol, by which the worm can enter any system. This information is leaked by some group of hacker ( The Shadow Brokers) and they used it for WannaCry Ransomware Attack. But it was not a Zero-day flaw. Microsoft released the security patch to fix the vulnerability two months before, on 2 March 2017.

WannaCry is the name of the ransomware virus. It is a ransomware program that is targeting a windows operating system nowadays. WannaCry Ransomware attack is a kind of cyber attack that is attacking mostly business networks, home network users are very unlikely to be affected. It installs on the system when you open a malicious attachment in mail, malicious link or goes to any untrusted or malicious website. This virus is launched on Friday 12 May 2017. It has been affected more than 230,00 computers in 150 countries. The most affected countries are Russia, Ukraine, India, Taiwan, etc.

The WannaCry Ransomware attack hackers demanded payment of $300 to $600 ( Approx Rs. 19,000 to Rs. 38,000)in bitcoins(cryptocurrency). They have earned about $75.6k till now. The British NHS, international shipper FedEx, telecommunications company Telefonica and others were among the targets. In India, the computer of Andhra Pradesh police department was infected by this virus.

The screen of the attack device will look like 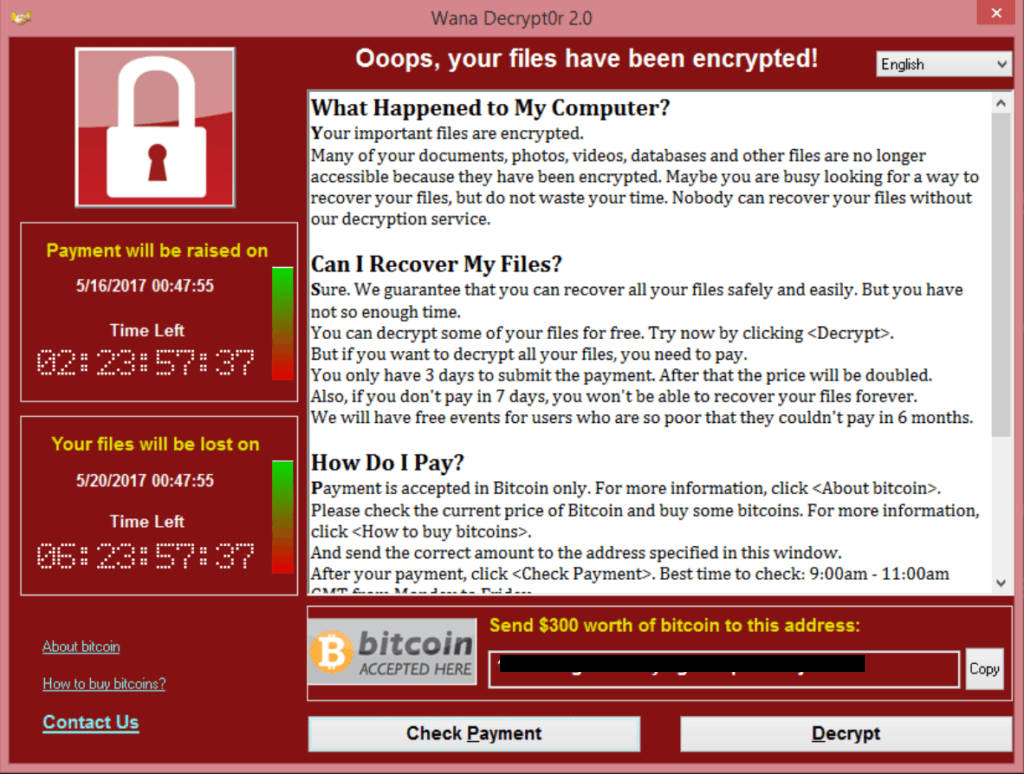 The meaning of ransom is to a paid sum of money to release the captive. The Ransomware is a type of malicious software that will block the access to a computer or lock all your data until you will pay a demanded money. Typically. it will encrypt all your saved data and to decrypt your data, you have to pay some amount of ransom.

EFFECT: It will block the access to your computer or lock your computer and it can also encrypt your files stored on your local drives.  Ransomware spread 31% from email, 28% from attachment clicks, 24% from unknown link clicks, 4% from malicious links and websites, 13% from other sources.

The first known ransom was “AIDS Trojan” was developed by Joseph Popp in 1989. The most famous attack of Ransomware was is 2012 “Reveton” and in 2013 “Cryptolocker”.